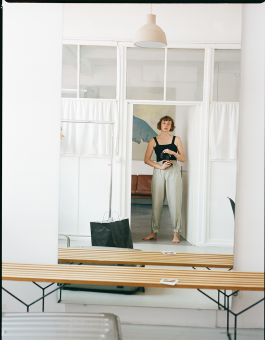 *1993 in Hildesheim, Germany. Based in Berlin and Dortmund. Focus on portraiture, editorial and fine art photography. Mostly shooting on analog film. BA in Visual Communication at Berlin University of the Arts in 2019. Currently enrolled in the MA photography programme at FH Dortmund.

May FEATURE photography and writing for »Halm und Hand« appear in The Weekender, issue 34

September SCHOLARSHIP workshop »From Exploration to Self Expression« at NOVA Academy of Arts Belgrade, Serbia, financed by DAAD

May COMMISSION portraits of musician Valentine

November FEATURE »This may be a seed« in IYL Magazine, AM issue

September SOLO EXHIBITION »This may be a seed« at Frollein Langner in Berlin, Germany

March COMMISSION artwork for the Phantoms EP of KHUSHI